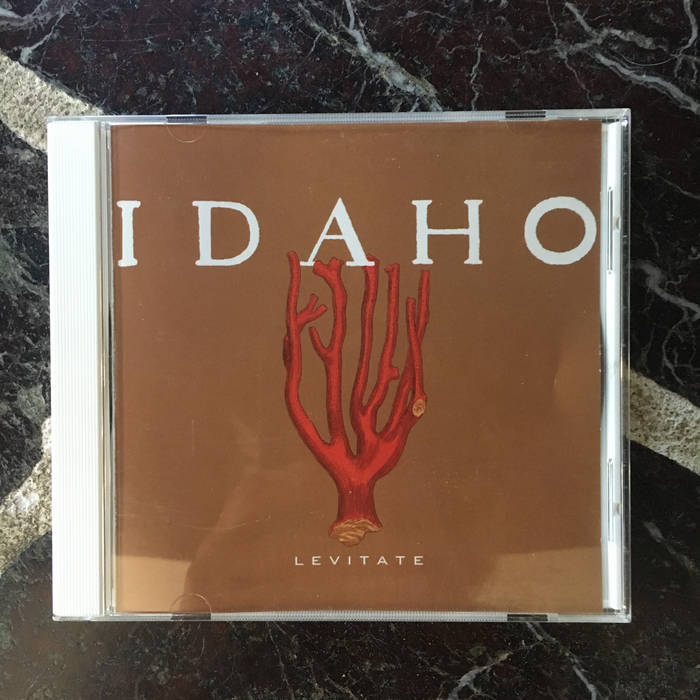 The American Revolution, as we all learned in fourth grade, was rooted in the notion of personal liberty; self-determination, the triumph of freedom, and most of all, independence from tyrants. The American Patriots loved liberty so much that they were willing to risk their lives to free themselves from the despotic grip of the British monarchy. So, with the help of French people, the Patriots took it upon themselves to beat some ass, after which everything was better. God bless America.

As the sole member of Idaho, Martin's love of independence mirrors that of our noble forefathers. Give Martin liberty or give him death-- just take a look at the liner notes for Idaho's sixth and latest LP, Levitate: "Produced by Jeff Martin. All instruments by Jeff Martin. All songs by Jeff Martin." The bastard even "reserves all of his rights" (oh wait... does everyone do that?). As if he weren't already overburdened with the writing, the production, the performing, and the rights-reserving, Martin's music bears his own imprint, Idaho Music.

It's easy to be cynical of self-reliant rock stars. Often they're assholes, like Billy Corgan or Jason Pierce of Spiritualized, who fired his whole band via letter. Others we regard as perhaps a little abnormal; Mark Linkous of Sparklehorse, for example, whose idea of creativity escapes all but the most intoxicated. But, having owned a few Idaho albums and seen them in concert, I feel that Jeff Martin's reasons for independence differ from those of his self-reliant peers.

The biggest reason may be simply that Martin really is more talented than anyone he knows. Besides for his obvious ability as an instrumentalist (Martin is a classically trained pianist and wields a four-string guitar), what's most striking about Levitate is the production quality; like last year's Hearts of Palm, the precise, stripped-down approach on Levitate is remarkably effective at communicating emotions of longing, loneliness and distance. It tends towards a more organic sound than Hearts of Palm; the piano remains mostly acoustic, and figures prominently on almost every song. But Levitate keeps the innovative guitar, vocal and piano effects and manipulations that lent a profound haunting quality to Idaho's prior releases.

"On the Shore," for example, includes a lightly played acoustic piano joined by Martin's lazy, gentle vocals, and simple percussion that almost mimics rainfall. Distorted guitar feedback brings the composition to a halt, leading into "Levitate Pt. 2," a preview to the plainly beautiful piano theme of the album's title track and finale. "Santa Claus is Weird" takes the emotion of distance literally; it sounds as if the drum kit is being played on the opposite side of a warehouse. You also have little moments like the wispy, spectral voices in the break between verses on "20 Years" (one of three rock numbers on the disc) that tell you Martin is paying attention to detail.

Levitate isn't all roses for Martin, though. His lyrics occasionally leave something to be desired, as on "Casa Mia." Like much of the rest of the album, the orchestration of the song effectively communicates loss and regret, but Martin then over-enunciates awkward words like "bougainvillea" (as in the plant) and "hollow point" (as in the bullet), both of which stand out as contrived. Hardcore "lyrics people" may have difficulties with this and a few other tracks. In addition, the songwriting on Levitate isn't quite as compelling as prior releases-- it tempers some of Martin's passion and intensity, and in doing so, loses a bit of its edge.

It's easy for sad-rockers to sound melancholy, but it's hard to do it with as much elegance as Jeff Martin. Levitate is not Idaho's best release (see Three Sheets to the Wind or Hearts of Palm), but it is one of their most coherent and complete, palatable from start to finish. Kudos to Jeff Martin for creating another fine album on his own, embodying our forefathers' ideals of independence and personal liberty, and most importantly, for doing it without the aid of the French.

Bandcamp Daily  your guide to the world of Bandcamp

Cannibal Corpse's George "Corpsegrinder" Fisher stops by for an interview